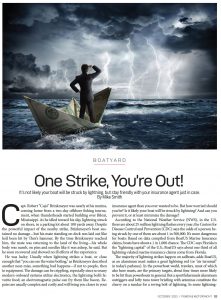 With the increase in extreme weather events and lightning flash frequency, its no surprise that boat buyers are beginning to give greater consideration to their protection against lightning strikes. A recent article inPower amp; Motoryachtmagazine investigates ways boat owners are dealing with..

A comprehensive look at boat hull types and designs - the most fundamental part of any vessel...

Tom Brady, Owner of a $6 Million Yacht, Never Imagined Himself as a Boat Man

Tom Brady isn’t just the world’s most celebrated football quarterback and sports figure; because of his impressive career, he is also filthy rich, with his worth estimated at well over $200 million. That said, he once promised himself he would never buy a boat, no matter its size and ame..

This Jetboat built in New Zealand uses a Nissan Skyline GT-R motor to cruise the most lovely waterways you’re likely to see any time soon. This boat, while it definitely flies under the radar in terms of styling and interior finishes, is surely fast and over the top when it comes to power. In ..