2022 Acura Integra will be a five-door fastback

The fifth-generationAcura Integra will be a sporty-looking five-door hatchback. Due to be revealed in 2022, the new Acura Integra will likely replace the small ILX sedan in North America which has been on sale since 2012. While many were hoping for a two-door model that would revive the spirit of th..

Lucid just hit another milestone and has inched closer to delivering cars to customers. On Tuesday, Lucid kicked off production of the Air electric sedan with the first salable units with VINs rolling off the assembly line. These cars aren`t destined for customer garages, however. Lucid spokesperson..

Hyundai has been spotted testing a prototype for a compact electric sedan to be called the Ioniq 6. While it may look like a modern interpretation of the Dodge Neon under the heavy camouflage gear, the final design is expected to resemble the stunning Hyundai Prophecy concept unveiled last year. Som..

An adhesion fault could cause the windscreen to detach from its frame, according to the manufacturer.Chrysler has recalled 32 examples of its Chrysler 300 sedan, citing a potential fault with thewindscreen adhesion. The affected vehicles were sold between2019-2021stamped Model Years2019-2021. Ther..

The Toyota Yaris sedan, which is, has been discontinued in India, where production stopped yesterday September 27. Distributor Toyota Kirloskar Motors TKM has committed to provide after-sales support to owners and will also provide spare parts at least for the next 10 years. “This move is .. 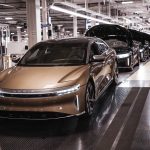 Lucid Group has announced that it will begin delivering its first sedan, the Air Dream Edition sedan, in October. Production of the Air has begun, according to the automaker, who is holding a Production Preview Event this week at its Casa Grande, Arizona, manufacturing facility. The first units of t..

by Car and Driver

We visited the Arizona facility where the new Tesla-fighting luxury electric sedan comes from, and so did an excited group of Air reservation holders. Customers will start getting the cars next month...

by Paul A. Eisenstein, The Detroit Bureau

EV startup Lucid rolled the first “customer-quality” Air sedan off the line Tuesday during a “Preview Week” event at its new Arizona assembly plant.The first “customer-ready” Lucid Air models rolled off the assembly line in Arizona. The nascent automaker plans to deliver the first of its..

It’s kind of unfair to compare a Honda Accord to a Dodge Charger. The first is a mid-size sedan aimed at budget-conscious consumers, whereas the second is a large, performance-oriented sedan still relatively budget-friendly, about the same size as a Toyota Avalon or a Nissan Maxima. The Acco..

by Marc Carter, The Torque Report

Mercedes-Maybach is celebrating its 100th birthday with a special version of the S-Class called “Edition 100”. The S-Class Edition 100 is going to be a very unique version of the V-12 powered sedan, since only 100 units will be built. The Edition is based on the long-wheelbase S680 model..